Original post:
Hey, I survived the cold, cold weather we had last week (though it was certainly not as cold as Portland &amp; Seattle- there are many benefits to living on the coast!). One of those very cold days we took a walk on the dunes, which the dogs thoroughly loved. It was strange hiking on a frozen trail through the forest though.

We're getting all geared up for Christmas, which for me of course means knitting &amp; crafting various little gifts. One of this year's endeavors was a shark ornament for my good friend ( &amp; co-worker) Steph, who loves sharks.

I actually paid attention &amp; wrote down what I did so I could repeat it, so I may as well post it here so anyone else desiring a shark ornament can make one too! Maybe someday I'll put up my anemone pattern as well. These ornaments do require a ridiculous amount of sewing small, fiddly bits together and weaving in ends, but it's worth it! If you want tips on how to do them more seamlessly, see below. 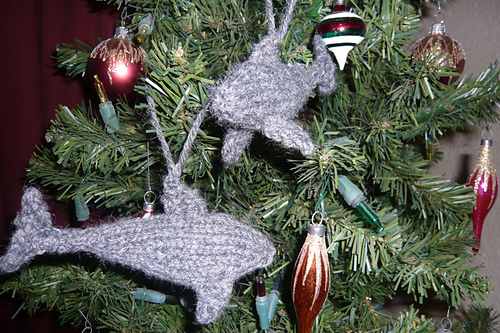 I used some leftover Lion Brand Wool Ease in a gray color, probably less than a quarter of a skein for 2 sharks, so less than 50 yards (45m).

Note: If you weave the fin ends in strategically, you can both reinforce the fins AND make the garter stitch look more like moss stich, which looks nicer.
(These instructions are for the smaller of the 2 sharks. To make the bigger one, knit an extra row between each of the tail increase rows, and increase up to 17 stitches.)

If you want, sew a black bead on for eyes. I haven't gotten to that part yet myself, but intend to shortly. :)
Voila- sharkey! 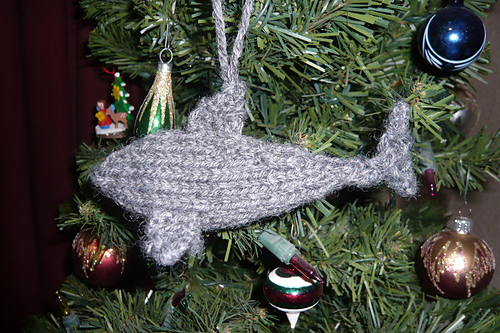 If you made the nose longer &amp; knitted the tail horizontally rather than vertically, you could easily turn this into a dolphin, and by changing the overall color &amp; shape of the dorsal fin, it could become any number of cetaceans!


EDITED TO ADD SEAMLESS NOTES:
these notes are from the lovely Lady Sunkist who knit this pattern seamlessly as dolphins for her marine biologist son

To knit nearly seamlessly:
start at the tail- cast on 9 stitches.
Knit one or two rows and then decrease - SSK at the beginning, &amp; a K2tog at the end of the row.
Continued decreases at each end until 3 stitches rem. Then continue with the regular instructions for the body &amp; dorsal fin.
For the pectoral fins, pick up 4 stitches from the body.
Knit several rows, doing decreases until 1 stitch rem. Weave in ends, pulling fins into the proper curved shape.
Posted by Kristin at 4:01 PM